Back to the Renaissance! Born in 1492 in Brussels, Bernard Van Orley painted this Annunciation in 1518.  You can find it in the National Museum of Norway. 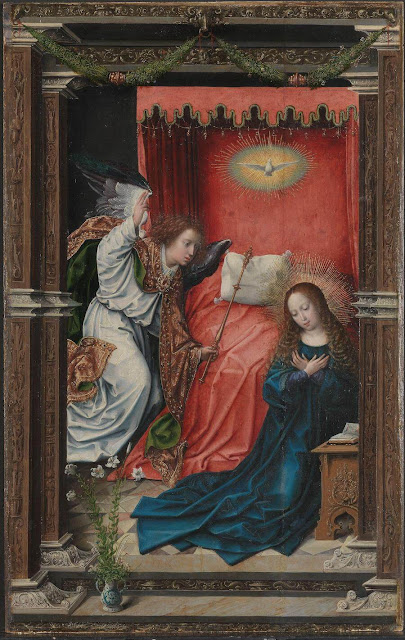 Bernard van Orley is regarded as one of the most important Flemish painters in the transition between the Middle Ages and the Renaissance north of the Alps. One of the first artists to visit Italy and be inspired by the ideals of the Renaissance, he was hailed by his contemporaries as the “Raphael of the Low Countries”. His paintings are typified by their meticulous details and vivid colours. He also emphasized a sense of space influenced by the Renaissance’s interest in linear perspective and the architecture of antiquity. Van Orley ran a large studio with many assistants in both Antwerp and Brussels. He served intermittently as a court painter, first for Margaret of Austria, the governor of the Habsburg Netherlands, and subsequently for her successor, Mary of Hungary.

This is an "Annunciation in Flowers" created by Macria Carole in the Mehndi style from India. The artist, who in a Christian involved in healing through art, offers workshops for groups all over the world, and allows people to unite their pain with the story of Jesus. 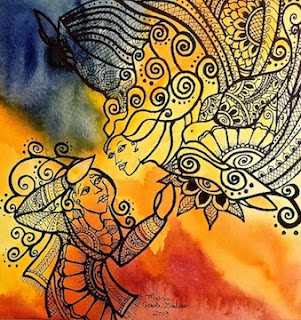 Here’s the background of the illustration in an art form which most westerners (like me) are familiar with from seeing henna designs in National Geographic photos:

For this piece, I began with fiery watercolor yellows. Heaven has come to earth! (The rescue mission for mankind has begun!) I have used large flowers for Mary, suggesting she is a virgin, along with a typical Indian dupatta. She shows surprise in her face at this news because she has not been with a man. I have portrayed Gabriel as a creature who is powerfully breaking through into earth from heaven. I have used many mehndi symbols and forms in Gabriel's attire in order to portray the concept of rich other-worldliness. I have also suggested the presence of the Holy Spirit through the dove woven into Gabriel's attire.

I have tried to look up information about this batik Annunciation, but a reverse image search has provided me nothing at all. (The best Google could come up with was "artifact.") 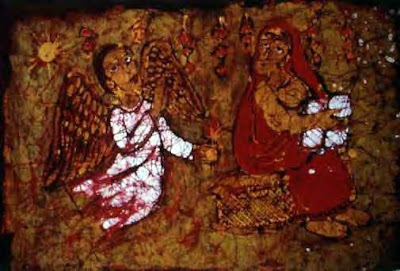 Here is a video explaining the process of creating batik art:

This Annunciation from the Princeton University Art Museum is simply attributed to the "Artés Master." The write-up on the Princeton Museum website gives no indication what is written on the tiles scattered across the foreground of the painting.

This Annunciation by Gentile Bellini (circa 1475) was long attributed to a disciple of Andrea Mantegna. See it up close on the website of the Museo Nacional Thyssen-Bornemisza.

You can find the most outstanding works of 13th century artist Pietro Cavallini right where he put them in the 13th century: in the churches of Rome (and elsewhere!). This Annunciation is in the splendid church of Santa Maria in Trastevere in the charming neighborhood "across the Tiber" where you care always sure to find a good meal, and where the Community of Sant' Egidio has their headquarters.

This good-sized devotional Annunciation (almost 20 inches tall!) in polychrome terracotta is from the collection of the Princeton Museum of Art.

Remember to Pray the Angelus!
Get the weekly image in your email!