Pondering the Angelus with the Angels

Today is the feast of the Archangels Michael, Gabriel and Raphael, the three heavenly messengers who are identified by name in the Bible. While Michael is represented in the Old and New Testaments as a princely defender of God's people, and Raphael (in the Old Testament book of Tobit) as the companion of wayfarers and bringer of remedies, Gabriel's role in Old and New Testament is that of helping humans grasp a message from God. (Gabriel is also considered a divine messenger within Islam.) The three messengers are called "archangels" by Catholic tradition not because of their rank among the angels, but because of the high status of their mission.

The Annunciation story allows the artist to release all of his or her imagination in depicting the status of the message Gabriel was sent to bring. In Simon Bening's depiction, Gabriel, as well as Mary, is under the radiance of the Holy Spirit. The archangel wears a crown and bears a staff or scepter, and his magnificent cope is upheld in the front by a small angel, with a whole team of small angels bearing the train! He approaches Mary from on high, from a raised area at least two steps above the ground floor where her chair, bench and knitting are situated. The setting is both a temple (and the "glory of the Lord filled the Temple" as in Solomon's day) and a home, where Mary has her knitting basket and favorite chair.

Although Mary, intent in her meditation, does not see all the angelic magnificence that is approaching, we at least are primed for a very significant message: "Hail, Full of Grace! The Lord is with Thee!" 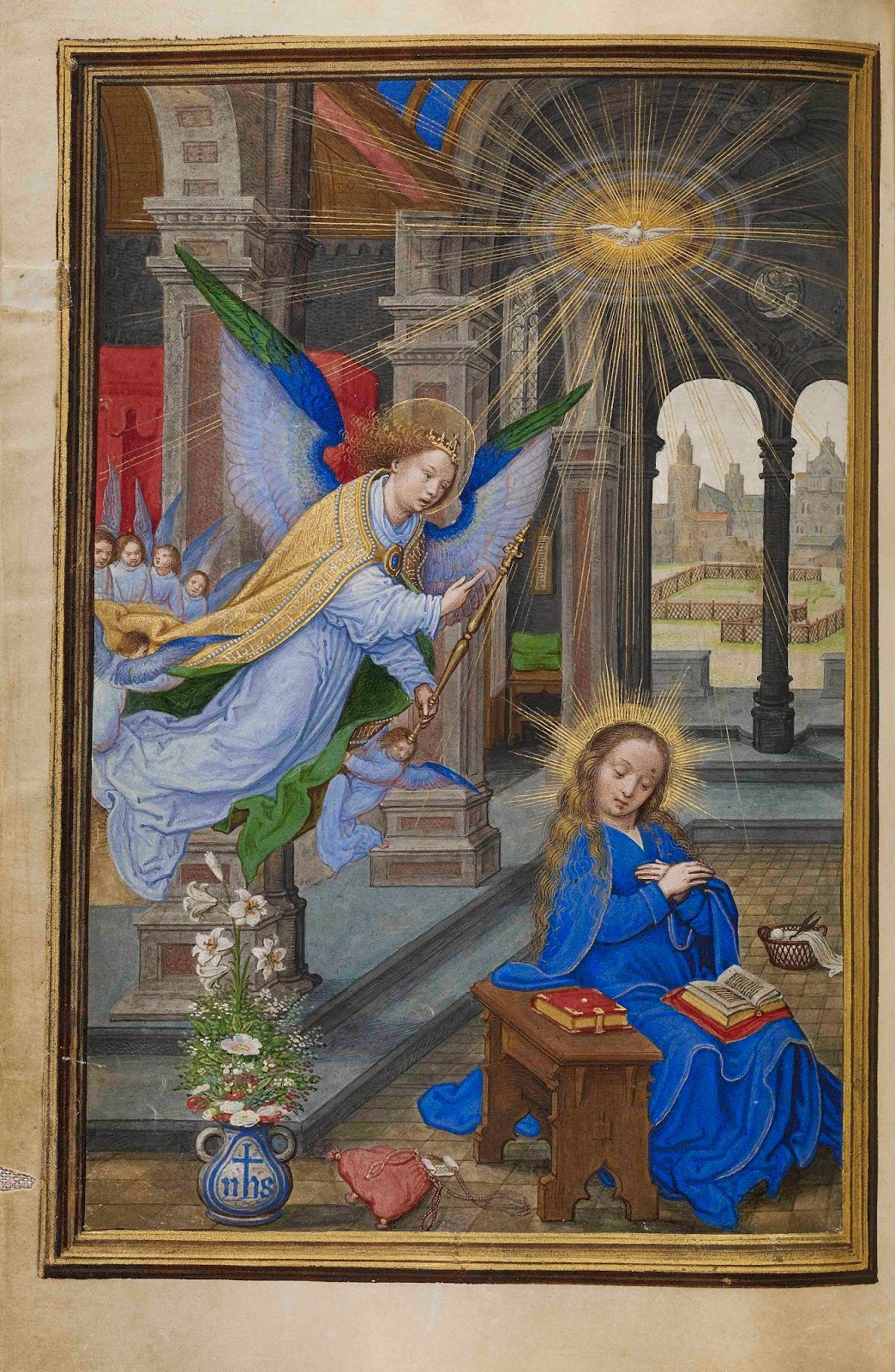 In artistic representations of the Annunciation, Mary's attitude is always primary. All history is, literally, hanging on her words! Each artist takes pains to highlight this using the tools available: setting, lighting, furnishings, posture.  The depiction by Fra Carnavale (below) is fairly unique in being set not in Mary's private room or in an enclosed portico, but outside, albeit in a courtyard. The architecture seems to dominate the scene in a way that almost overwhelms the figures of Gabriel and Mary. The white dove, barely distinguishable from the clouds, soars over the narrow doorway (or perhaps from that open doorway on the left) to shower new grace upon the unveiled Virgin. The setting may be fairly unusual, but her response is familiar: "Be it done to me."

Today's feast of Our Lady of Sorrows puts a poignant spin on our praying of the Angelus. It is clearer today that Gabriel's words ("The Lord God will give him the throne of David his father") do not presage an untroubled life and an easy victory for the one whom Mary will conceive and bear.

The image this week, in keeping with the feast, is not that of the Annunciation itself, but of the moment when Gabriel's message was made known to the wider world: the Nativity. The shadow of the Cross stands ready to receive Mary's child when the Hour comes. The depiction is by German priest and artist, Sieger Köder, well known for "hiding" images in his images. In this Nativity, look for the inscription INRI, which Pontius Pilate will order placed on his Cross: "Jesus of Nazareth, King of the Jews."

In the Angelus today, pray for parents who must witness the terrible sufferings of their children, especially in situations of war.

Posters, cards and meditation books on the art of Sieger Köder are available from Pauline Books & Media, UK.
at September 15, 2014 No comments:

The opening scene of the Angelus prayer is perhaps the Bible scene most frequently depicted in art, even more frequently than the Crucifixion. This stunning array of perspectives may help us to renew the powerful tradition of pausing three times a day to recall those central words of the Creed: "For us men and for our salvation, he came down from heaven, and by the Holy Spirit was incarnate of the Virgin Mary and became man."

The Angelus Project looks forward now to featuring a different Annunciation scene every week, at times with a brief reflection on the work. We start with the Bouts Annunciation, from the J. Paul Getty Museum, as appreciated by Bill Viola: "It speaks to me..." The Spirituality of the Angelus

Special thanks to Billy Kangas over at Patheos Catholic Channel for highlighting a medieval approach to the Annunciation narrative that serves as a guide in a solid spiritual life.


From the editor:
I have been making an effort lately to collect images of the Annunciation wherever I go (online or in person); I hope to begin soon to feature a different Annunciation every week as part of an ongoing mission of promoting the prayer of the Angelus. Check back soon!
at September 06, 2014 No comments:

From St Alban's Cathedral (St Albans, England), a detail from the Annunciation window: 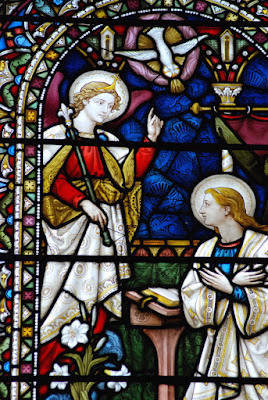 Get the weekly Angelus image in your email!

We rightly admire Muslim neighbors and co-workers who put everything on hold five times a day in answer to the "call to prayer." But Christians have a call to prayer, too! It is the Angelus. Morning, noon and evening we are invited to pause and reaffirm our faith in the Incarnation: The Word was made flesh and dwelt among us (Jn. 1:14), because "God so loved the world that he sent his only Son" (Jn. 3:16).